A chance encounter with an invasive species usually seen in aquariums netted a cool ten grand in college scholarship money... 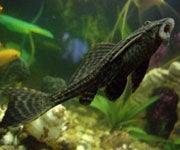 A chance encounter with an invasive species usually seen in aquariums netted a cool ten grand in college scholarship money for one Texas angler.

From this story in the Houston Chronicle:
_The only positive thing to possibly come from the continuing spread of non-native armored catfish in Texas waterways is that one of them will help put Andrew Cumberland through college. Cumberland, a New Braunfels High School sophomore, was fishing in the Guadalupe River near his home on July 12 when he saw what he said he thought was a carp in the shallows. The young angler fished out some doughbait he was packing in his kayak, baited up and pitched the gooey gob to the fish, which immediately obliged him by gobbling the offering. He landed the fish, which turned out not to be a carp.
__”I had never seen a fish that looked like it – it seemed prehistoric,” Cumberland told Texas Parks and Wildlife Department staff. The 21-inch, 3.45-pound fish was an armored catfish, as Cumberland discovered when he took the fish to TPWD’s A.E. Wood Fish Hatchery in San Marcos, and staff there identified it.

“..Cumberland is a member of Federation of Student Anglers, an international organization of anglers from elementary school through college. FSA, based in Bulverde, offers a $5,000 college scholarship to any member who catches a Texas record fish of any species. Also, the organization awards a $5,000 scholarship to any member who catches a Texas record fish during an officially sanctioned FSA event. And Cumberland caught his record pleco while fishing an FSA Tuesday Night Fishing Series Tournament. So his catch landed him $10,000 in scholarships as well as a state-record fish..”
_
That’s right, Cumberland landed the new Texas state record…plecostomos. You know, those cute little suckermouthed cleaner catfish that everyone has one of in their aquariums? As it turns out, the armored catfish is quickly becoming a huge problem in Texas waters. According the article, the fish is wreaking havoc on native fish habitat and populations. First introduced in the San Antonio river in the 1950s, the fish have thrived and spread to other waterways, muscling out natives, destroying food chains and degrading habitat and water quality. And they are apparently completely worthless as a food or commercial source.

Is the plecostomos the new Asian carp, minus the aerial show? Any Texas anglers dealing with plecostomos invasions in their home waters?