The future of the bobwhite quail is at a crossroads, according to a sobering new report out from a 25-state... 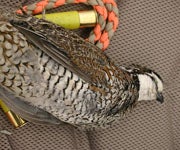 The future of the bobwhite quail is at a crossroads, according to a sobering new report out from a 25-state coalition of conservation groups and state wildlife agencies.

_Declaring that conservation efforts on behalf of bobwhite quail and other native grasslands birds are “far inadequate” to stop their decline in the U.S., a national coalition of 25 state wildlife agencies has issued a new situation assessment and a call for decisive action. The report was unveiled at the annual conference of the Southeastern Outdoor Press Association. “A much larger, long-term commitment by all states and conservationists is imperative to overcome the half-century decline in bobwhite habitats and populations,” according to the first ever State of the Bobwhite: Grassland Conservation at a Crossroads from the National Bobwhite Conservation Initiative (NBCI). “Bobwhites are slipping through our fingers, and time is not on our side. We have the expertise; now we need to muster the resolve.” Bobwhite quail populations have plummeted as much as 80 percent over the past half century by some estimates, while entire suites of songbirds that depend on the same habitat of native grasslands and shrublands have recorded similar declines.

“…The 37-page State of the Bobwhite is the first-ever coordinated attempt to assess state-by-state the status of bobwhite populations, hunting activity and conservation efforts across all 25 member states of the NBCI. And although bobwhite numbers continue to decline, the report does highlight a number of positive actions at the state level.”_

The rest of the report can be read on the NBCI website. Do you think there’s still time (and hope) for bringing bobwhite quail populations back form the brink? What do you think can and should be done?