Vermonters and moose lovers everywhere are mourning the passing of Pete, the orphaned moose whose plight captured the attention of…people... 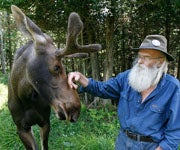 Vermonters and moose lovers everywhere are mourning the passing of Pete, the orphaned moose whose plight captured the attention of…people who pay attention to such things. Pete’s death was bad enough, but it appears that Pete’s been dead for quite some time and the animal everyone thought was Pete was in fact a Pete proxy. Confused? Read on…

From this story on abcnews.com:

The owner of the game park where Pete the Moose lived has taken responsibility for covering up the death of Vermont’s favorite animal, the state’s fish and wildlife commissioner said Saturday. Pete, whose life in captivity helped prompt the state to pass new wildlife laws and who received a gubernatorial pardon last winter, died in early September at the Big Rack Ridge in Irasburg while being tranquilized during hoof trimming. But state officials insisted he was alive until Friday, even issuing a photo taken Thursday of a moose it identified as Pete. The moose in the picture turned out to be a different animal, prompting Pete’s Facebook fans to start accusing the state of a cover-up. But Commissioner Patrick Berry said park owner Doug Nelson has since admitted that he delayed telling state officials about Pete’s death.
_
_
Pete, who was adopted as a calf after dogs attacked his mother and a sibling, rose to fame in 2009, when state officials said they didn’t want native wild animals mixing with the elk at the game preserve, out of fear that chronic wasting disease could spread to the native animals. Animals other than elk on the preserve were ordered hunted and killed, but after a public outcry, lawmakers crafted a compromise. In it, the animals at the Big Rack Ridge preserve were designated a “special purpose herd,” oversight of which was transferred from Fish and Wildlife to the state Agency of Agriculture. That meant that preserve owner Doug Nelson owned the animals. But lawmakers reversed themselves earlier this year, saying wild animals in the state can’t be privately owned and are legally a public trust, owned by all Vermonters. Under that legislation, the native deer were ordered removed within three years, but Pete was allowed to stay.

Goodbye and Godspeed to that big muskeg in the sky, Pete. We hardly knew ye…