Some Texas Quail Hunters Throwing In The Towel This Season

Texas is unarguably the last best place for hunting wild bobwhite quail. But in the wake of a brutal drought... 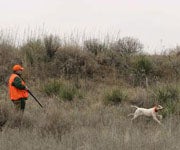 Texas is unarguably the last best place for hunting wild bobwhite quail. But in the wake of a brutal drought and fire season, many Texas quail hunters are simply writing off the entire season.

From this story in the Austin American-Statesman:

I was on a large ranch in Shackelford County northeast of Abilene last weekend. Lots of country, too many deer, few cattle and no quail. I was there for deer, but I was aware of the quail. It was brutal. Two mornings in a bow blind on a perfect hillside on opening weekend of the quail season. No wind and almost a frost. I heard a grand total of two.

That would be TWO quail, not two coveys. The next day I heard none. Granted, I couldn’t be everywhere on that ranch at one time but there were other people there who never heard a single whistle. So, as if there were any doubt before today, I’m officially declaring quail season 2011-12 over, dead, defunct, no breath left in its body. Obviously, I’m
a little late to the party on this.

Most people had already written the season off because of the drought, declining quail populations statewide and a diminished hunter group that’s discouraged from multiple years of poor hunting and scant numbers of birds. Things are so bad that Dale Rollins, the state’s leading bobwhite quail guru, is encouraging landowners and hunters to forego the gun this year and take up photography. He’s even offering prizes for the best pictures showing quail and dogs and hunters.

What about you? Have you written off this year’s quail season before it starts?