Ever wonder why squirrels are such feisty little critters, relative to their size? As it turns out, it might all... 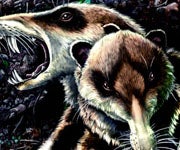 Ever wonder why squirrels are such feisty little critters, relative to their size? As it turns out, it might all be in the genes…

From this story on CNN:

As suggested in the “Ice Age” movies, some crazy-looking creatures roamed the planet millions of years ago. But there is a large gap in the fossil record from about 60 million to 120 million years ago when it comes to mammals in South America. Where were they, and what did they look like?

_Scientists have now discovered a quirky little creature from this time period, as reported in the journal Nature. It’s called Cronopio dentiacutus, and it resembles a mouse-sized squirrel with proportionally long teeth, although technically speaking it is neither a squirrel nor saber-toothed.

“The reality of exploration and research can sometimes be as strange as fiction that we see in the movies,” said Guillermo Rougier, lead author of the study and professor at the University of Louisville._

The extinct mammal, which lived 94 million years ago, belongs to the lineage that has given rise to the marsupials and placental mammals that we know today. It’s related to all living mammals, including humans in a remote way. It has been extinct for about 60 million years. Rougier and colleagues examined its unique skull.

“It was a lot more primitive than we are with regard to the way in which the skull was put together; the teeth were very primitive,” Rougier said. “The skull is about an inch long.”

_Scientists believe was Cronopio dentiacutus was an insectivore, which is common for small animals today. Their teeth seem to be specialized for cutting and crushing; the large canines of Cronopio dentiacutus could puncture through small insects. To give you some perspective on the size of these canines, imagine if one of your front teeth came down below your chin, Rougier said.
_
So, (you knew it was coming…) what would you use to stop a charging saber-toothed squirrel? Pellet gun? Maybe a 17 HMR? Your boot?