—Chad Love Field & Stream‘s Wild Chef extraordinaire, David Draper, has blogged about some pretty non-mainstream fare in the past,... 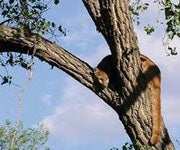 Field & Stream‘s Wild Chef extraordinaire, David Draper, has blogged about some pretty non-mainstream fare in the past, but might we soon be seeing him top that by whipping up a home-state batch of…cougar steaks? Maybe, if the state of Nebraska decides to open a mountain lion season. Mmmmm, tasty cougar…

From this story on omaha.com:

Nebraska’s wildlife agency wants its ducks in a row in case it needs to declare open season on mountain lions. A bill introduced Tuesday in the Nebraska Legislature would allow the Game and Parks Commission to set a season and sell permits to hunt the state’s largest wild predator. The agency, however, has no definite plans to make big cats the target of hunters if Legislative Bill 928 should pass, said Sam Wilson, a wildlife biologist who monitors mountain lions in Nebraska. “If our research shows we can or should have a mountain lion hunting season, we will be able to do that,” Wilson said.

Thoughts? Do any of you mountain lion hunters have a favorite feline recipe you’d like to see David attempt?