Electronic duck decoys. You see them virtually everywhere now, but the ethics of using them remains a point of never-ending... 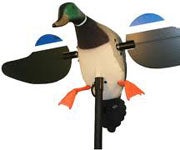 Electronic duck decoys. You see them virtually everywhere now, but the ethics of using them remains a point of never-ending debate among waterfowlers. These devices are legal in 47 states, and the state of Washington is not one of them. But now some Washington State waterfowlers are pushing to get the electronic motion decoys legalized.

From this story in the Spokane Spokesman-Review:

_If it looks like a duck, acts like a duck and flaps its wings like a duck, conventional wisdom dictates that it is, in fact, a duck. But not always. Not when the duck in question is really a Mojo Duck, RoboDuk or any other brand of spinning-wing decoy that waterfowl hunters use to lure real birds into shooting range.
__Spinning-wing decoys, whose motorized, battery-powered wings rotate rapidly to simulate a bird landing on a pond, are more widely used but no less divisive among duck hunters than when they were introduced a decade ago. The debate whether these faux fowl are legitimate hunting tools or provide an unfair (and unnecessary) advantage to those who use them continues to ruffle feathers at public hunting areas and private duck clubs._

The Washington Fish and Wildlife Commission is considering a proposal to reinstate the use of electronic duck decoys. Hunters have through March to comment on the proposal. The decision will be made at the commission’s April meeting. Electronic decoys were banned in Washington in 2002. Just about the only thing hunters on opposite sides of the spinning-wing decoy debate agree on is that they work as well as advertised.

Thoughts? Is it just another tool in the bag or does it give an unfair advantage? Is their popularity good for the sport, or does their ubiquity and ease of use simply degrade traditional waterfowling skills? How many of you are currently using motion decoys in your spread? What should Washington do?