British Police on Lookout for Wolfman

If you’ve ever seen the classic horror/comedy flick “An American Werewolf in London” you know that Old Blighty is a... 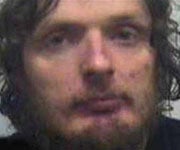 If you’ve ever seen the classic horror/comedy flick “An American Werewolf in London” you know that Old Blighty is a hotbed of lycanthropic activity. With all the rending and tearing of human limbs and such, it’s entirely understandable that some werewolves must be controlled to maintain public safety. But British authorities may have gone too far this time in their persecution of a poor, gentle wolfman whose only crimes are poaching rabbits and maybe skipping a few too many baths…

From this story on foxnews.com:

_A “wolfman” who has been living wild in dense British woods for five years was being hunted by detectives Thursday. Police issued a photo of eccentric Wayne Morgan, 37, late Wednesday and appealed for help tracking him down amid fears he could die in the cold weather. The long-haired loner, dubbed “wolfman” because of his wild appearance, apparently has hidden deep in the forest since 2007. He survives by hunting rabbits and foraging for plants and berries.

Locals used to glimpse him through trees as they hiked or walked dogs, but he always slipped back into the shadows, shunning contact. He was last spotted over a year ago. Police Sergeant Teresa Ross said, “There are concerns about his welfare. Anyone who may have seen him should let us know when any sightings took place. He lives off the land — but he may be hungry and on the lookout for food.” Cops fear that Morgan, who is unmarried with no children, may have been killed by last winter’s cold weather. Last month, they searched with dogs trained to detect human remains but found nothing. A member of his family said he became a woodland hermit after losing his job as a forestry worker, adding, “He’s been offered help with accommodation and food but doesn’t want it. Last time I saw him, he was filthy. I can’t understand why he’s living like that.”_

Live and let live, I say. What harm is he doing? And hell, he doesn’t look any worse than what anyone would look like after a week of deer or bird camp, right?