Idaho Officials Forced to Use Helicopters to Control Wolf Population

Even with a hunting season designed to help control their numbers, Idaho wildlife officials are being forced to shoot wolves... 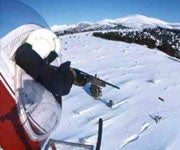 Even with a hunting season designed to help control their numbers, Idaho wildlife officials are being forced to shoot wolves in an effort to protect the state’s struggling elk herd.

From this story on spokesman.com:

Federal wildlife agents shot and killed 14 wolves from helicopters in Idaho’s remote Lolo Zone earlier this month. The three-day operation, aimed at reducing the number of wolves roaming the backcountry area where elk herds are struggling, was carried out in a partnership between the federal Wildlife Services agency and the Idaho Department of Fish and Game.

Wildlife managers hope a sustained reduction in wolf numbers will allow the Lolo elk herd, which has been severely depressed since the mid 1990s, to rebound. “We’d like to see one of Idaho’s premier elk populations recover as much as possible,” said Jim Unsworth, deputy director of the department at Boise.

_The department has long had a goal of reducing the number of wolves in the area along the upper Lochsa and North Fork Clearwater rivers, once renowned for its elk hunting.

The agency first sought permission in 2006 from federal wildlife managers to kill 40 to 50 wolves that at the time were still under the protection of the Endangered Species Act. The state failed to win permission then and eventually gave up in favor of seeking the overall delisting of wolves. Delisting occurred in 2009 and a wolf hunting season was authorized._

Hunters killed 13 wolves in the zone that year, far fewer than wildlife managers hoped for. Following the hunting season, wolves were briefly returned to federal management. They were delisted for a second time in the spring of 2011 and the department quickly approved a control action that resulted in six wolves being shot using helicopters. Hunting resumed in the fall and trapping started in November. Through Wednesday, hunters and trappers had taken 22 wolves from the Lolo, bringing the total known wolf kills there to 42 and in line with the department’s plan for the area.