New Bird Species Found in Smithsonian Drawer, May Be Extinct

So maybe the woolly mammoth turned out to be a hoax, but here’s a cool story about another allegedly non-existent... 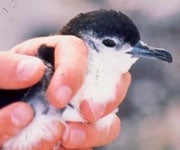 So maybe the woolly mammoth turned out to be a hoax, but here’s a cool story about another allegedly non-existent creature, a seabird no one knew existed until a specimen was discovered in a drawer at the Smithsonian.

From this press release from the American Bird Conservancy:

A bird specimen that sat in a drawer at the Smithsonian for nearly 50 years has been revealed to be a totally new species to science, the first in the United States for 37 years. The discovery of the true identity of the bird was thanks to a sharp-eyed scientist at the Institute for Bird Populations (IBP), who realized that the specimen had been misidentified after it was collected on Midway Atoll in the Northwestern Hawaiian Islands in 1963. Differences in measurements and physical appearance compared to other similar species were confirmed by DNA analysis, and the bird was given the name Bryan’s Shearwater, Puffinus bryani. “…The Bryan’s Shearwater is the first new species to be described from the United States and Hawaiian Islands since the Po’ouli was discovered in the forests of Maui in 1974. The Bryan’s Shearwater is the smallest shearwater known to exist. It is black and white with a black or blue-gray bill and blue legs. Biologists found the species in a burrow among a colony of petrels during the Pacific Ocean Biological Survey Program in 1963.

But here’s the sadly ironic catch: the newly-discovered, newly christened Bryan’s Shearwater may actually be extinct.

“We don’t believe that Bryan’s Shearwaters breed regularly on Midway or other Northwestern Hawaiian Islands, based on the extensive seabird work in these islands by biologists with the Pacific Seabird Project,” Pyle said. The specimen was the only observation during this extensive project, which occurred on islands and atolls throughout the North Pacific from 1963 until 1968. “They would almost certainly have encountered more Bryan’s shearwaters then and since if they bred regularly in the Northwestern Hawaiian Islands.” Given that Bryan’s shearwaters have remained undiscovered until now, they could be very rare. It is sadly even possible that they went extinct before ever being recognized, although there is at least one more record of a bird in a burrow on Midway from 1990, and observations at sea of what could be Bryan’s Shearwaters as recently as 2005.

Interesting stuff. Here’s to hoping there are some more Bryan’s Shearwaters out there. It’s nice to know that even today, there’s still a little natural mystery in this world. We could use some more of this.