Dallas-area hunters may soon be able to bowhunt in their home county if a Texas Parks and Wildlife proposal gets... 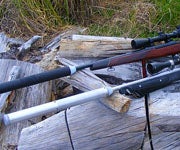 Dallas-area hunters may soon be able to bowhunt in their home county if a Texas Parks and Wildlife proposal gets the nod. And another proposal would make it legal for Texas hunters to use suppressors for most firearms when hunting.

From this story on pegasusnews.com:

The Texas Parks and Wildlife Department is considering opening deer hunting in three North Texas counties and another on the upper coast this fall as part of recommended changes to the 2012-13 Statewide Hunting Proclamation. TPWD staff recommended an open season for deer in Dallas, Collin, Rockwall, and Galveston counties during a presentation Wednesday to the Texas Parks and Wildlife Commission’s Regulations Committee….

_The deer season in Collin and Rockwall counties has been closed since 1976 after agricultural development had virtually eliminated deer habitat. Since that time, agriculture has been gradually displaced by the extensive urban, suburban, and exurban growth of the Dallas-Fort Worth area, which has resulted in highly fragmented habitat and minimal populations of white-tailed deer, mostly in riparian areas surrounding lakes and streams.The department believes that there is no biological reason to prohibit hunting and this is a way to increase hunting opportunity. Opening a season would also provide an additional method for addressing nuisance deer issues.

Regarding the proposed amendment allowing the use of silencers, the department has determined that there is no resource- or enforcement-related reason to prohibit the use of firearm silencers for the take of alligators, game animals or game birds, and therefore proposes to eliminate the current prohibition. The department notes that if the proposal is adopted, it will not relieve any person of the obligation to otherwise comply with any applicable state, federal, or local law governing the possession or use of firearm silencers._

Thoughts? With an increasing numbers of states considering it, are suppressed firearms the wave of the future?