Where did the quail go? That is the question that everyone in quail country, especially Texas, is asking. Even with... 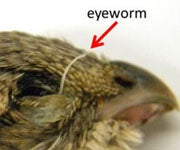 Where did the quail go? That is the question that everyone in quail country, especially Texas, is asking. Even with the recent drought, many Texas quail hunters reported seeing quail early in the year, especially in 2010, when weather was favorable–only to then discover those quail were gone come fall. As in completely gone. Roanoke Island gone.

But now researchers with the Rolling Plains Quail Research Ranch (RPQRR) in Texas may have discovered a potential (and partial) explanation for the bobwhite’s troubling disappearance. It’s gross, but fascinating.

From a press release from the RPQRR:

_Parasitic worms in the eyes and intestines of bobwhite quail have been found at record high levels in Texas bobwhites according to an ongoing research project. And, while researchers caution that their results are preliminary, early findings suggest the worms could be impairing the quail’s ability to thrive as it historically has across west Texas. “The quail we’ve analyzed thus far suggest record-high levels of parasitism by eyeworms and cecal worms” said Dr. Dale Rollins, director for the Rolling Plains Quail Research Ranch.

The Rolling Plains Quail Research Foundation recently funded a $2.0 million dollar study to evaluate the impacts of diseases and parasites on this area’s struggling quail population. Research scientists from Texas Tech’s Institute of Environmental and Human Health, Texas A&M’s College of Veterinary Medicine, and the Caesar Kleberg Wildlife Research Institute were recruited to tackle specific research topics ranging from viruses to parasites. Eight different research projects are being conducted as part of the research effort, dubbed “Operation Idiopathic Decline.” Last summer quail were collected from a total of 21 ranches across west Texas and 10 Wildlife Management Areas in western Oklahoma (in conjunction with Oklahoma Department of Wildlife Conservation). “Our initial research started in 2009 and we noted high infection rates of eyeworms and cecal worms here on the RPQRR, a 4,700-acre site just west of Roby, but we didn’t know at the time how extensive the problem was. Now it appears that the problem extends across the Rolling Plains, at least,” Rollins continued.

“We took blood and tissue samples from nearly 600 quail in 2011 and then sacrificed a smaller number for complete necropsies. This is the first comprehensive look at disease in quail since the 1920s” Rollins said. “About half of the quail we’ve examined thus far had eyeworms, and the average is five worms per bird. The most we’ve found in one bird’s eyes was 53 worms. Basically all of the birds have the cecal worms, with some birds harboring more than 400 such worms” Rollins noted. Rollins credits Dr. Alan Fedynich, a parasitologist with the Ceasar Kleberg Wildlife Research Institute at Kingsville and graduate students Stacie Villarreal and Andrea Bruno for their efforts in the discovery. Rollins said the eyeworms are about half the diameter of a pencil lead and about a half-inch in length. The cecal worms are about an inch in length and reside in the gut of the quail. According to Rollins eyeworms have been reported for bobwhites, but not in such high numbers.

The theory is that eyeworm infections could hinder a quail’s eyesight and make it much more susceptible to both predation and injury from flying into objects. Eyeworms infect quail through an intermediate host, which researchers suspect could be grasshoppers or cockroaches eaten by the quail. Rollins said that although parasites may not be the “smoking gun” that quail hunters are looking for, the parasite angle is one worth looking harder at.

“The value of longer-term research efforts like this one is that we can see how worm numbers change over successive years as a result of changing weather. Who knows, maybe last summer’s hot, dry weather reduced the parasite’s abundance” he offer ed. “Only time, and additional research, will tell” Rollins said._

It’s interesting stuff, and certainly might explain the baffling quail disappearance that many quail hunters have noticed the past couple years. Has anyone ever noticed eyeworms in the quails they’ve shot? I certainly haven’t, but you can bet I’ll be looking from now on.