Virginia May Lift Its One-Handgun-Per-Month Restriction

—Chad Love The state of Virginia may lift its long-standing ban on purchasing more than one handgun per month. From... 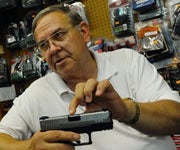 The state of Virginia may lift its long-standing ban on purchasing more than one handgun per month.

Virginia is poised to lift a 19-year-old limit on handgun purchases, with the Republican-controlled state Senate expected to do away with the one-gun-per-month cap in a final vote Friday. With the purchase limit likely headed for extinction, Richmond appears to have grown friendlier to gun rights since Republicans took control of the evenly divided Senate last month, pro-gun and gun-control activists agree. This week, the Senate passed a bill prohibiting localities from requiring that people seeking concealed handgun permits submit fingerprints as part of their applications. The House passed a bill allowing government employees to store guns and ammunition in personal cars parked in workplace lots, including those at child-care centers and parks.
_
That is not to say the gun lobby will get everything it wants from this General Assembly session, even with the GOP in control of the House, Senate and governor’s mansion. A Senate committee has killed two high-profile gun-rights proposals that would have done away with state background checks and prevented colleges from banning firearms on campus._