2011 was a record year for Keystone State black bear hunters, with over 4,000 bears taken. From this story on... 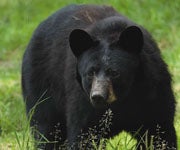 2011 was a record year for Keystone State black bear hunters, with over 4,000 bears taken.

From this story on whptv.com:

The numbers are in and Pennsylvania game officials say last season was a record year for bear hunting. They state that two big factors played a role in the big year, there is a bigger bear population out there and more hunters are getting licenses to go after them than ever before. The numbers show that 4,350 bears were harvested in Pennsylvania during last year’s hunting season. Part of the reason for the record number is the growing bear population, there were 18,000 to 20,000 last year.

The other reason is more hunters getting their licenses for bears. With an increased interest in hunting bears we wanted to know, what are people doing with those animals. “A lot or hunters use the bear meat for food, make some bear hamburger,” commented one official.

Any Pennsylvania readers here among the lucky 4,350?