—Chad Love We all hate fleas, but if you think modern fleas are bad, just be thankful you weren’t around... 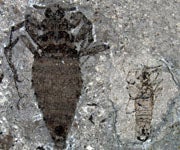 We all hate fleas, but if you think modern fleas are bad, just be thankful you weren’t around a few million years ago…

From this story in The New York Times:

Scientists have discovered the world’s oldest fleas to date — bloodsuckers that lived among (and possibly on) dinosaurs. Fossils found in northeastern China belong to two ancient species of fleas, the researchers report in the current issue of the journal Nature: one dating to the Middle Jurassic, about 165 million years ago, and the other to the Early Cretaceous, about 125 million years ago. Females ranged from one-eighth to half an inch long, males from one-sixth to a third of an inch. That makes them giants. Today’s fleas are only about one-tenth the size. Also, although modern fleas feed primarily on the blood of mammals, the ancient fleas may have relied on that of dinosaurs.

“They had very elongated and sharp mouth parts,” said the study’s first author, Diying Huang, a paleontologist at the Chinese Academy of Sciences in Nanjing. This sharp mouth part, known as a siphon, may have allowed the fleas to penetrate the leathery skin of reptiles like dinosaurs, Dr. Huang said.

Let’s hope no one clones prehistoric fleas, because if they ever did you can forget using the Deep Woods stuff — you’re gonna need a new strength. Jurassic Period OFF!, maybe?