True story: In college, I had a friend who majored in electrical engineering who, as a class project, tried to... 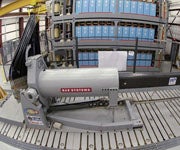 True story: In college, I had a friend who majored in electrical engineering who, as a class project, tried to build a home-made magnetic rail gun out of common household items. All he succeeded in doing was setting his creation on fire and subsequently flunking out of school to become a professional video store clerk. The U.S. Navy seems to be having a bit better luck…

A super-powerful, futuristic weapon called an “electromagnetic railgun” is being developed at long last for Navy warships, the Associated Press reports. Right now the gun is just a prototype, being tested at the Naval Surface Warfare Center Dahlgren Division in Northern Virginia. But here’s a sneak peak into five incredible things the railgun will be able to do: Shoot rounds more than 100 miles away. Compare this with 5-inch guns on destroyers, which have a range of about 14 miles.

Shoot rounds at up to 5,600 miles per hour. That’s more than seven times the speed of sound. Use a magnetic field and electric current to generate energy. Most guns use chemicals to generate energy for firing rounds. Fire 10 rounds a minute. As Wired writes: “You can’t exactly put an electric gun on automatic.” Carry a “lethal mechanism”. That’s according to Roger Ellis, the Office of Naval Research’s electromagnetic railgun program manager, who says the railgun wouldn’t necessarily have to shoot an explosive to inflict damage. Ellis won’t say any more about the mechanism.

Look for the sporting version, swathed in your favorite camo pattern, to debut at SHOT Show 2054; with a pithy review and commentary from David Petzal.