Two Utah wingnuts are behind bars after setting a series of bizarre booby traps on a popular hiking trail. Then... 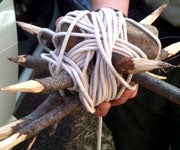 Two Utah wingnuts are behind bars after setting a series of bizarre booby traps on a popular hiking trail. Then (as all master criminals seem to do these days) they bragged about it on Facebook.

From this story on Gawker.com:

Two men whose parents did not raise them well have been arrested in Utah after allegedly setting up potentially deadly homemade booby traps to ensnare travelers along a popular hiking trail. One of the traps was designed to send a tripped victim tumbling into a bed of pointy wooden stakes protruding from the ground. Another, pictured above, was to be triggered via a fishing line trip wire; when crossed, it would send a 20-pound boulder, to which several sharpened spikes had been affixed with what looks to be just tons and tons and tons of rope, speeding at a victim’s head. The traps were set around the entrance to a makeshift wooden shelter used by hikers as a sleepover and campfire site.

They were discovered by a patrolling forest ranger, who was able to disable them. He speculated they were designed to catch travelers passing through in the dark. Investigators tracked down the two men suspected of setting the traps, Benjamin Steven Rutkowski, 19, and Kai Matthew Christensen, 21, after receiving a tip the suspects had bragged about the traps on their Facebook pages.

We’ve all heard of (or maybe even run across) booby-trapped marijuana patches on public land. And as horrible as that is, at least there’s an evil, twisted logic to it. But this? Sometimes the mind boggles at the number of unknown psychos out there…