A giant swordfish was recently caught in the Florida Keys, but it won’t qualify for any records because the 683-pound... 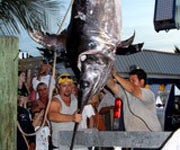 A giant swordfish was recently caught in the Florida Keys, but it won’t qualify for any records because the 683-pound monster was caught on an electric reel.

From this story on keysnet.com:

_Another mammoth daytime swordfish — 683 pounds — has been caught off the Florida Keys. Fishing on the Mystique, a 61-foot Viking owned by Katherine MacMillan, Marathon captain Billy Rabito Jr. presided over the catch of the broadbill hooked some 30 miles to the south of Marathon Tuesday afternoon. The fish bit a whole 5-pound bonito hooked to 80-pound braid, spooled on an electric Shimano Tiagra reel. Mike Driskell, the boat’s mate who lives on Little Torch Key, manned the reel. It was weighed on a scale, recently certified by the International Game Fish Association and the state of Florida, according to Byron Goss, co-owner of Big Time Bait & Tackle in Marathon, who witnessed the weigh-in at Key Colony Beach Marina. About 150 spectators, who gathered for the weigh-in, were treated to complimentary fresh swordfish steaks, Rabito said.__

Rabito said it took about two hours to bring the big broadbill to the boat and additional time to get the fish onboard through the boat’s large transom tuna door with the aid of an anchor windlass. Everyone on the boat, including MacMillan, helped to get the swordfish into the cockpit. “I feel blessed to have hooked that fish, keep it hooked and get it to the boat,” said Rabito, a second-generation Keys captain who has been fishing professionally for the past 22 years. “Daytime fish can often come unhooked, so it’s the opportunity of a lifetime.” Rabito’s swordfish won’t qualify for either a state or IGFA record because it was caught on an electric reel. Thus a 612.75-pound broadbill caught off Key Largo at night May 7, 1978, will continue to be the official state record, according to the Florida Fish and Wildlife Conservation Commission data._