An Idaho trapper’s photos that went viral have again stirred up the wolf debate. From this story in the Idaho... 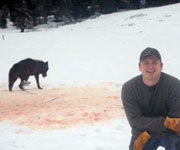 An Idaho trapper’s photos that went viral have again stirred up the wolf debate.

From this story in the Idaho Statesman:

_The trapper’s photograph in front of a living wolf in a leg-hold trap surrounded by bloody snow first appeared on a website for trappers in mid-March. But the furor it has generated in recent weeks has brought new national attention to Idaho’s management of wolves, removed in 2011 from the endangered species list. Trapper Josh Bransford had all the necessary permits and permission from the landowners, and had participated in the mandatory wolf-trapping class, state conservation officers concluded after investigating. “They couldn’t find that he did anything illegal,” said Mike Keckler, spokesman for Idaho Fish and Game. Had the trapper followed guidance provided in the trapping class, however, he would not have photographed himself with the live animal, Keckler said. “We would have preferred that he dispatched the animal before taking the photograph with it,” Keckler said.__

The picture, first posted on Trapperman.com, has since been removed from the website. The Center for Biological Diversity, a group that advocates for protecting endangered species, sent letters to both the Forest Service and Idaho Attorney General Lawrence Wasden requesting investigations into the trapper’s actions. It sent another letter Wednesday to Fish and Game. “If this is what passes as compliance with the Department of Fish and Game’s rules, there’s a serious problem with the adequacy of state regulation,” said Michael Robinson, a spokesman for the group in New Mexico._