The poaching of African rhinos has reached a crisis level, according to this article in The Washington Post: Wildlife officials... 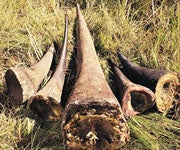 The poaching of African rhinos has reached a crisis level, according to this article in The Washington Post:

Wildlife officials say rhino poaching in Africa has reached crisis levels with nearly 1,000 animals killed in the last five years. Wildlife experts from across Africa said in a Tuesday statement they would lobby for harsher penalties and fines for people involved in illegal rhino horn trade. In a meeting in Nairobi, wildlife experts and and private conservation groups also resolved to reach out to the governments of countries where there is demand for the rhino horn and work with them to create stringent laws against the trade.

China and Vietnam are some of the destination markets for the horn, where they believe the horn has medicinal qualities. Last year 448 rhinos were killed in South Africa which has the highest rhino population in the world. Conservationists say this year poachers have killed 135 rhinos there.