Is this a new reality TV series just waiting to happen? The price of eels, yes, eels, is approaching the... 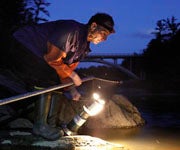 Is this a new reality TV series just waiting to happen? The price of eels, yes, eels, is approaching the stratosphere.

From this story on abcnews.com:

_Tiny translucent elvers — alien-looking baby eels the size of toothpicks, with big black eyes and spines — are mysterious creatures, floating thousands of miles from their birthplace in the middle of the Atlantic Ocean before ending up each spring in Maine’s rivers and streams. But there’s no mystery about what’s drawing hundreds of fishermen to riverbanks to catch the creatures during the two-month fishing season. The price of the eels has skyrocketed to unparalleled levels, with catches bringing up to $2,000 a pound.

__A worldwide shortage of the prized dinner fare, imported in infancy from Maine to Asia to be raised in farm ponds, has buyers paying top dollar for the baby American eels. A pound of eels should be worth around $30,000 on the open market once grown to market size, according to one dealer. Elver prices go up and down all the time, but nobody’s seen them shoot up the way they have over the past two seasons. Last year, at $891 per pound, elvers became Maine’s fourth most-valuable wild fishery, worth more than well-known traditional fisheries such as groundfish, shrimp and scallops.

With this year’s astronomical prices, fishermen and dealers are on edge about poachers, fishermen’s safety, the secrecy of fishing spots and unwanted publicity. On top of all that, there’s a move to have the eels protected by the Endangered Species Act._

Anyone participating in this slimy new gold rush?