I don’t know what to say about this one. I really don’t. It defies introduction, among other things like sanity,... 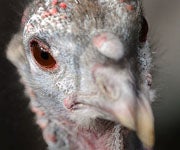 I don’t know what to say about this one. I really don’t. It defies introduction, among other things like sanity, logic and reason.

From this story in the Tulsa World:

Thursday, the Senate Committee on Public Safety voted 7-2 in favor of House Bill 2522, which would allow firearms to be carried openly without a concealed-carry permit. The bill does mandate that anyone wanting to openly carry a firearm would have be 21 or older and undergo training. The training would supposedly be tougher than that now required for a concealed-carry permit. The bill originally would have allowed anyone with a concealed-carry permit to open-carry.
_
During committee discussions, (Oklahoma State Senator Ralph Shortey, R-Oklahoma City) Shortey argued that he shouldn’t be required to pay fees and get a license to carry a weapon. Here’s how he justified that: “I was in oil and gas,” Shortey said. “I was out on a lease at one time and I got attacked by a turkey. Wait until you get attacked by a turkey. You will know the fear that a turkey can invoke in a person. And so I beat it with a club. That was all I could do. “I wish that I had a gun with me,” he said. “And I started carrying a gun in my truck after that without a license because I didn’t want to get attacked by a mountain lion. Turkeys are bad enough.”_

But first, you must ask yourself: how would I defend myself in the event of a sudden turkey attack? What would I do? I bet this woman would have loved to have had a firearm with which to defend herself. Just listen to those blood-curdling screams. On second thought, maybe, just maybe, the idea of a turkey defense gun isn’t such a crazy, ridiculous idea, after all? And maybe my home state senator isn’t a silly loon, but is in fact, way ahead of his time?

But I don’t want to color your judgment with my unbiased musings. What do you think?