__ It’s one of the eternal coffeehouse debates of earnest naval-gazers everywhere: Does life imitate art, or does art merely... 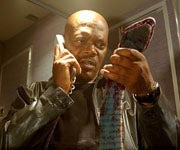 It’s one of the eternal coffeehouse debates of earnest naval-gazers everywhere: Does life imitate art, or does art merely imitate life? Who knows, but when it comes to dealing with m***********’ snakes on m***********’ planes, I think I’ll go with the latter, because everybody knows that anything, anything that Samuel L. Jackson appears in is high art. However, I’m not sure the Australian pilot of this airplane would agree…

From this story on msnbc.com:

A pilot made an emergency landing during a flight in Australia, reportedly telling air traffic controllers, “Look, you’re not going to believe this. I’ve got snakes on a plane.” Australia’s ABC News reported that Braden Blennerhassett, 26, swiftly put the Air Frontier plane on the ground after making the unusual mayday call during a flight from Darwin to the remote town of Peppimenarti on Tuesday. Air Frontier offers charter and scenic flights throughout Australia’s northern territory.
_
“My blood pressure and heart rate was a bit elevated — it was an interesting experience,” Blennerhassett told Nine News. “As the plane was landing, the snake was crawling down my leg, which was frightening.” On the ground, a firefighter discovered that the snake that crawled down Blennerhassett’s leg was not alone — a green tree frog was also on the aircraft, Nine News reported. No other wildlife was found, and both animals had disappeared by the time a wildlife ranger came for them. It is thought the snake, believed to be a non-venomous green tree snake, may have been hunting the frog, Nine News said. Geoffrey Hunt, director of Air Frontier, which owns the plane, clearly hadn’t seen the Hollywood film “Snakes on a Plane.”_