Well, it had to happen eventually. The zombie-themed shooting market was just too hot, too saturated for it not to... 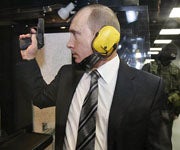 Well, it had to happen eventually. The zombie-themed shooting market was just too hot, too saturated for it not to come to this: The development of a new zombie gun, only this one doesn’t take out zombies. Nope, this gun turns you into a zombie…

From this story in the (UK) Daily Mail:

Mind-bending ‘psychotronic’ guns that can effectively turn people into zombies have been given the go-ahead by Russian president Vladimir Putin. The futuristic weapons – which will attack the central nervous system of their victims – are being developed by the country’s scientists. They could be used against Russia’s enemies and, perhaps, its own dissidents by the end of the decade. Sources in Moscow say Mr Putin has described the guns, which use electromagnetic radiation like that found in microwave ovens, as ‘entirely new instruments for achieving political and strategic goals’. Mr Putin added: ‘Such high-tech weapons systems will be comparable in effect to nuclear weapons, but will be more acceptable in terms of political and military ideology.’ Plans to introduce the super- weapons were announced quietly last week by Russian defence minister Anatoly Serdyukov, fulfilling a little-noticed election campaign pledge by president-elect Putin.

Despite his public persona in recent fawning interviews, Vladimir Putin is not a nice guy (just ask any Russian journalists or dissidents who have tried to speak up against him…), and it’s no surprise his government is developing such weaponry. But the obvious question is, when will we see these zombie guns at SHOT?