When I was a child, I had a really terrifying shopping mall Easter bunny experience. I’d rather not talk about... 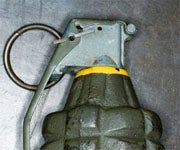 When I was a child, I had a really terrifying shopping mall Easter bunny experience. I’d rather not talk about it, but the haunting memory of those few horrifying moments perched atop that giant rodent’s lap spurred two things within me: A subsequent intense and cathartic desire to take up rabbit hunting, and the firm belief that the Easter bunny is pure evil. And now I have my proof…

From this story on ABCnews.com:

A 3-year-old British boy on an Easter egg hunt Saturday morning discovered a live hand grenade. The device was on the side of a busy road next to the field where families were conducting their Easter ritual in Holford, Somerset. According to reports in the British press, the boy was actually standing on the device when an adult spotted him. “We were beginning to count up the eggs at the end of the hunt and I saw a boy of three standing on an object. ‘It was brown and about four inches high. It looked like an Easter egg, but it was a hand grenade,” Stuart Moffatt told the Daily Mail. ” I was shocked. The boy who was standing on it thought it was a rock.”

Moffatt is an engineering consultant who was attending the event with his wife and their three young children. About 25 children were reportedly in that field on the Easter egg hunt. This is Somerset reported that the device was destroyed in a controlled explosion. The Mail says the grenade is believed to have been a relic from World War II.

“A relic from WWII.” Yeah, right. I know the truth. Anyone else with me on this, or am I “crazy” and have “bunny issues” like my therapist claims?