Would You Ever Put Your Head in a Polar Bear’s Mouth?

OK, a show of hands: How many of you think this guy is eventually going to end up being digested,... 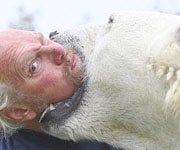 OK, a show of hands: How many of you think this guy is eventually going to end up being digested, and how many think this hand-reared polar bear will continue act like it’s in a Coke commercial for the rest of its life?

From this story in the UK Sun:

Sixty-stone Agee has formed an amazing bond with tamer Mark Dumas after he plucked her from a zoo as a cub to star in films and television ads. The pair are so close they wrestle, kiss, nap and even go swimming with each other. Mark, of Abbotsford, British Columbia, Canada, said: “If anyone else tried this they’d end up as Agee’s dinner. “The only people she likes are me and my wife Dawn. “I have worked with bears for 40 years, so I can read Agee’s body language and know how to behave safely.”