Author Jean Craighead George Passes to Her Side of the Mountain

For those of us who grew up in the B.D. epoch (before digital), reading was the primary way to stoke... 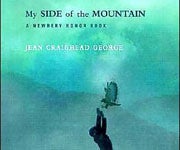 For those of us who grew up in the B.D. epoch (before digital), reading was the primary way to stoke our young imaginations. There were few books that fired my pre-adult synapses more thoroughly than Jean Craighead George’s “My Side of the Mountain.”

This classic adventure/survival/nature tale about a boy named Sam, a falcon and their woodland adventures spurred many a childhood fantasy of mine. There were two people I wanted to be in 1979: Luke Skywalker and Sam Gribley. I knew, even at that tender age, that I’d never be able to make it into the cockpit of an X-wing, but Sam’s world was wondrously real, tangible and right outside my back door. Reading “My Side of the Mountain” was a huge factor in sparking my lifelong interest in hunting, fishing and the natural world.

So it was sad to read (via Stephen Bodio’s always awesome Querencia blog) of George’s passing.

From Bodio’s blog:
Old friends and heroes are dying faster than I can write about them. Jean Craighead George, author of one of my favorite childhood books*, My Side of the Mountain, and sister to the even better- known conservationists and falconers , the twin brothers Frank and John, died last week at 92. NYT here, Wiki here, her own home site here.

From The New York Times:
Jean Craighead George, a Newbery Award-winning writer for young people whose books brought the natural world from the Catskill Mountains to the Alaskan tundra to wild, luminous life, died on Tuesday in Mount Kisco, N.Y. She was 92. The author of more than 100 fiction and nonfiction titles that have collectively sold millions of copies, Ms. George was best known for two novels for older children, “My Side of the Mountain” (1959), which she also illustrated, and “Julie of the Wolves” (1972), illustrated by John Schoenherr. That book won the Newbery Medal — considered the Pulitzer Prize of children’s letters — in 1973. “My Side of the Mountain” tells the story of Sam Gribley, a youth who forsakes a life of quiet desperation in New York City to live on his own in the Catskills wilderness. There, he survives by virtue of the deep sympathy with nature that animates all of Ms. George’s protagonists, until the modern world closes in again.

The rest of the obit and the links in Stephen Bodio’s blog post are worth a read, as Ms. George led a pretty fascinating life. If you haven’t yet read “My Side of the Mountain” do yourself a favor: go find a copy and read it. Then do your children a favor and give it to them.

Did anyone else read and become inspired by “My Side of the Mountain”? What were some of the other nature-themed children’s and young adult books that influenced you growing up?