You know that “Animal Face-Off” Animal Planet show where scientists, engineers and animal experts use sophisticated forensic science to determine... 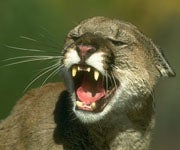 You know that “Animal Face-Off” Animal Planet show where scientists, engineers and animal experts use sophisticated forensic science to determine the winner of epic but purely hypothetical battles between various large and toothsome megafauna?

Bear versus tiger, croc versus hippo and that kind of stuff. Well, it appears the mountain lions of Montana are rendering the question of “mountain lion versus wolf” completely moot.

From this story on nbcmontana.com:

A state wolf specialist in Montana says mountain lions have killed two radio-collared wolves in the Bitterroot Valley since January. Liz Bradley of Montana Fish, Wildlife and Parks said she found a dead wolf last week with skull puncture wounds that are a trademark of a mountain lion.

She said the lion ate part of the wolf and covered the rest with debris. In January she found another dead wolf west of Lolo with the same wounds. Bradley said a deer carcass nearby indicates the two predators apparently fought. She said last year she found two other wolves with puncture wounds in their skulls.

So are you Team Kitty or Team Canine? One-on-one, it appears that a wolf is no match for a mountain lion. Makes sense. Just too much tooth, muscle, quickness and claw for a single wolf to handle, but I’m guessing when it’s a case of one-on-pack, it’s a different story. Any other match-ups you’d like to see?