If you’re a tiger poacher in India, you might want to invest in some body armor, make sure your will... 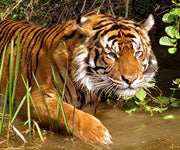 If you’re a tiger poacher in India, you might want to invest in some body armor, make sure your will is up-to-date, or maybe just give it up altogether, because you’re likely to get shot.

From this story on npr.org:
A state in western India has declared war on animal poaching by allowing forest guards to shoot hunters on sight in an effort to curb rampant attacks on tigers and other wildlife. The government in Maharashtra says injuring or killing suspected poachers will no longer be considered a crime. Forest guards should not be “booked for human rights violations when they have taken action against poachers,” Maharashtra Forest Minister Patangrao Kadam said Tuesday. The state also will send more rangers and jeeps into the forest, and will offer secret payments to informers who give tips about poachers and animal smugglers, he said.

According to the story, tiger poachers have become increasingly bold in India’s tiger reserves, where guards are often armed with nothing more than sticks. There are only about 3,200 wild tigers left in the world, and India has about half of them. Fourteen tigers have been killed just this year, and eight of those have been killed in the province where it’s now legal to kill poachers.