—Chad Love A new study by Delta Waterfowl seems to confirm what many waterfowlers have long suspected: More and more... 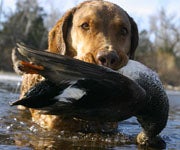 A new study by Delta Waterfowl seems to confirm what many waterfowlers have long suspected: More and more of our ducks are being shot later and later in the season.

From this press release from Delta Waterfowl:

While many states have extended waterfowl seasons from past years, according to the story, that’s not the only reason ducks are being shot ever later in the season. The study also looked at harvest data for non-migrating mottled ducks and found them to be shot at pretty much the same time they always were. So why are migrants being shot later in the year?

From the story: A hot topic in southern duck blinds is whether changes in northern agriculture that provide additional food may be holding ducks longer in northern states. The theory goes that field-feeding ducks like mallards and pintails will stay longer; fatting up on left over corn and soy beans in higher latitudes. If food was the driver of migration and harvest dates, says Dr. Rohwer, then gadwall and ring-necked ducks that never feed in fields should migrate and be harvested at the same time as in prior decades. The harvest data, however, shows that all four species show similar shifts in delayed harvest. The idea that northern agriculture is holding ducks back is ‘unlikely’, concludes the report.

So if it’s not later hunting season dates, and it’s not an excess of northern feed fields, could the delay be caused by the one large and extremely contentious elephant left in the room? According to the story, the answer is a firm and resounding “maybe, but we don’t know.”

From the story: _The report also had a preliminary look at whether or not migration may be delayed because of the potential effects of climate change. While the report concluded it’s ‘plausible’, the harvest data can neither prove nor disprove any connection between migration and climate change.
_
Thoughts? Reactions? What are you seeing from your spot in the blind? Have you noticed any curious or disturbing trends the past few seasons?