Are you in possession of a suspected Bigfoot turd? Maybe a giant fingerprint? Perhaps a clump of fur or some... 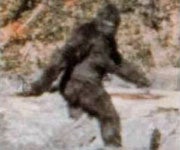 Are you in possession of a suspected Bigfoot turd? Maybe a giant fingerprint? Perhaps a clump of fur or some other bit of physical or forensic evidence from the time when that group of suspected Sasquatches broke into your cousin Earl’s single-wide while he was gone, drank all his Natty Lite, ate everything in the fridge, tore up the place and then left a big, steaming parting gift on his coffee table before disappearing back into the woods?

If you (or your cousin Earl) do happen to have evidence of The Hairy One’s existence, then Oxford University wants to talk to you…

From this story on Wired.co.uk:
Supposed yeti remains are being put under the microscope in a collaboration between Oxford University and the Lausanne Museum of Zoology. The Oxford-Lausanne Collateral Hominid Project has been created to try and entice people and institutions with collections of cryptozoological material to submit it for analysis. Anyone with a sample of organic remains can submit details of where and when it was collected, among other data.

Once a reasonable database has been collected, the team will select the most interesting samples (hair shafts are particularly desirable, apparently) and ask the owners to submit them for rigorous genetic analysis. The results of these analyses will be published in peer-reviewed journals.

According to the story, the project seeks to determine, once and for all, whether Bigfoot, Yeti and company truly exist, and they want your evidence to help them do it. So if you’ve got that unidentified “spoor” sitting on your mantle in a baggie, British scientists would love to put it to the sniff test. For more info, visit the project’s website. Have anything to donate to science?