The state of New York has a new brook trout record after a Warren County, NY angler boated a “football-sized”... 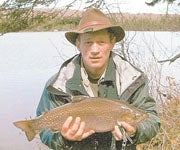 The state of New York has a new brook trout record after a Warren County, NY angler boated a “football-sized” brookie.

From this story in the Adirondack Daily Enterprise:
William Altman of Athol caught a 5 pound, 14 ounce brook trout while fishing in a backcountry lake in the West Canada Lakes Wilderness in Hamilton County on May 5. The fish was 21 inches long. The record-breaking fish was announced by the state Department of Environmental Conservation, which needed to verify that the fish was not a splake or a large stocked fish. This was the seventh time in eight years the record was broken.

According to the story, Altman caught the fish at an unnamed lake while trolling from his canoe. New York must be doing something right, because Altman’s almost-six-pound brook trout is the seventh New York State-record brookie in the last eight years.