Video: Deer Sticks Head into Hunters’ Blind for a Snack

You know panhandling is really getting out of hand when the allegedly wild wildlife walks up to a couple of... 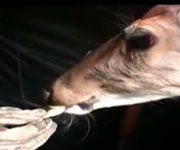 You know panhandling is really getting out of hand when the allegedly wild wildlife walks up to a couple of armed hunters and tries to bum a smoke. OK, so maybe it wasn’t a smoke but potato chips, since deer don’t smoke (that we know of), but still…

_Between them, Steve Hunt and Rick Lehman have been hunting for more than 50 years. But in April on the first day of turkey hunting season something unusual happened. A doe approached them. “She walked in and started playing with our turkey decoys,” said Hunt. It was all caught on Hunt’s video camera. “I’ve been part of a local team where we produce hunting videos,” Hunt said. The video shows the doe inching closer to the men. They were shocked. They say usually if they spot a deer in the wild it runs the other way. They positioned deep in the woods in southern Tuscarawas County. There say there is no petting zoo nearby and no big farms.
_
According to the story on wptv.com, the doe inched closer and closer to the two amazed men, who started petting her and feeding her potato chips.

_The men say they never thought of shooting her. To them, this was a sign of sorts, re-instilling the values they carry with them in the field.
_

“There’s a lot of ethics behind hunting it’s not a matter of just going out and killing animals, I don’t go out and kill animals, I hunt animals and yes I do eat what I shoot,” said Hunt.”It makes you look at hunting a whole different way,” said Lehman.

It sure does. As long as we’re going to anthropomorphize, I think it means deer know how to read the hunting regulations and have a highly-developed sense of time so they can jack with deer hunters during turkey season while scoring a few potato chips. Let’s see if this doe trots out her Bambi act this fall.

Anyone else have anything happen with a truly wild deer? And no, neighborhood deer don’t count…