—Chad Love Would you be comfortable with a corporate sponsor for your state wildlife agency? That’s what the Texas Parks... 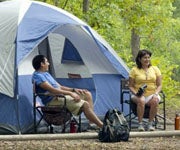 Would you be comfortable with a corporate sponsor for your state wildlife agency? That’s what the Texas Parks and Wildlife Department is looking into…

From this story in the Houston Chronicle:

In a first for the state, the Texas Parks and Wildlife Department is seeking corporate partners to use the agency’s well-known logo and brand in exchange for hard currency, the agency announced this week. The move provides a much-needed revenue stream as the department grapples with major budget cuts coupled with devastating droughts and wildfires. While other state park agencies have dabbled with similar ideas or struck corporate sponsorships deals for specific projects, industry officials believe this would be the first time a department that oversees a state’s natural resources actively seeks contract-based partnerships.

According to the story, TPWD officials say the move is needed after the agency, which oversees more than 90 state parks and all hunting and fishing in the state, had its budget cut by $114 million last year.

What do you think? Are you comfortable with state agencies being “sponsored” by private corporations? Is it just plain tacky? And aren’t there conflict-of-interest issues involved with such a move? Or is it just a smart business move?