—Chad Love Action on the SB 1221 bill, which seeks to outlaw the use of dogs for bear and bobcat... 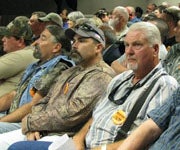 Action on the SB 1221 bill, which seeks to outlaw the use of dogs for bear and bobcat hunting in the state of California, has been delayed, for a while, at least.

You may recall the controversy over this bill, but it is still very much alive, thanks to a large public turnout — both for and against — at a recent public meeting.

From this story on redding.com:
A bill to ban using hounds to hunt bear and bobcat drew what legislators said was one of the largest crowds in recent memory to a state Assembly committee hearing on Wednesday. Some 300 people showed up for the Assembly Appropriations Committee’s vote on whether to approve SB1221. After dozens of people came forward to voice either opposition or support for the bill, the committee instead delayed action on the bill. “I would say that for high visibility issues, this is probably the biggest crowd I’ve seen,” Appropriations Committee Chairman Felipe Fuentes said after the hearing. The committee is scheduled to take up the bill in about a week, said Fuentes, a Democrat from Arleta.

I don’t live in California, so I can’t speak from experience, but it does seem like Golden State hunters are the most besieged group of outdoorsmen in the nation. Is California the top hunting rights battleground state?