Study: World Population Increase Could Force Us to be Vegetarians by 2050

A looming worldwide water shortage may force us all to become vegetarians by 2050, according to a new study. From... 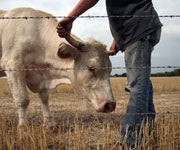 A looming worldwide water shortage may force us all to become vegetarians by 2050, according to a new study.

From this story in the (UK) Guardian:
Leading water scientists have issued one of the sternest warnings yet about global food supplies, saying that the world’s population may have to switch almost completely to a vegetarian diet over the next 40 years to avoid catastrophic shortages. Humans derive about 20% of their protein from animal-based products now, but this may need to drop to just 5% to feed the extra 2 billion people expected to be alive by 2050, according to research by some of the world’s leading water scientists. “There will not be enough water available on current croplands to produce food for the expected 9 billion population in 2050 if we follow current trends and changes towards diets common in western nations,” the report by Malik Falkenmark and colleagues at the Stockholm International Water Institute (SIWI) said.

According to the story, a meat-based diet consumes five to ten times more water than a largely vegetarian diet, and with one-third of the world’s arable cropland already used to grow feed for animals, the world simply doesn’t have enough resources to continue that trend for the two billion or so new mouths expected to be needing food by 2050.

Now, that is certainly a provocative assertion, and you can argue the merits (or lack thereof) of this study until you’re blue in the face, but the fact is, the world is in something of a sticky wicket, sustenance-wise. Commodity prices are sky-high, worldwide stocks are low, and sustained drought and other various and sundry weird weather is turning (for lack of a better term) “food bleakness” into something of the new normal. And while we, as proud hunter-gatherers, like to (sometimes a little too smugly) brag about how much we’re unaffected by the whims of food prices due to all that wild game we eat, that’s bollocks, really. The truth is, we, as hunters and anglers are just as dependent on the whims and vagaries of the worldwide food system as any non-hunting supermarket-dependent urban dweller.

Don’t believe me? Just ask any midwestern or plains state bird hunter what’s happening in the nation’s breadbasket. Ground that hasn’t seen a plow for decades (and probably with good reason) is being turned over and converted to farmland at a pace that is beyond breathtaking. In fact, 23 million acres of fallow grassland have been converted to crop production in the past five years.

To put that in perspective, that’s an area about the size of the state of Indiana. How much upland bird, waterfowl and deer habitat do you think that is? And in addition, beyond habitat loss, how do you think skyrocketing food prices are going to affect game and fish populations? We’re already seeing an increase in hunting and fishing activity in this country.

Do you really think that increased interest can be attributed to those silly television hunting shows, or does a lousy economy and higher meat prices have more and more people eying all that free-range protein out there? Now multiply that by a factor of ten, or twenty, if meat prices keep going up (and just ask any cattle rancher about that…). How do you think that increased pressure is going to affect your hunting?

The point is, as easy as it is, we just can’t scoff at or laugh off newspaper headlines about the whole world going veg, because as ludicrous as it sounds, the underlying issues that lead scientists to make such assertions are distinctly not. And as much we like to deny it, the future of hunting and fishing in America will be in some part shaped by external factors, and may end up being vastly different than what it looks like today.