Protected Territory Established for Jaguars in Arizona and New Mexico

Move over mountain lions, there’s a new cat in town, and yesterday it received its own Rhode Island-sized piece of... 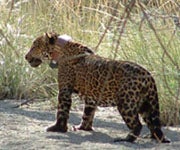 Move over mountain lions, there’s a new cat in town, and yesterday it received its own Rhode Island-sized piece of ground to roam in…

From this story on scientificamerican.com:

Jaguars, the third-largest cats after lions and tigers–and the biggest in the Western Hemisphere–used to live here. During the 18th and 19th centuries they were spotted in Arizona, New Mexico, California and Texas. Sometimes the cats roamed as far east as North Carolina and as far north as Colorado.
_
As humans encroached on their territory, the endangered cats’ range shifted south. Today it stretches from northern Argentina into Mexico’s Sonoran Desert. But jaguars cross into the American Southwest frequently enough for some conservationists to argue that they deserve critical habitat protection. Now, after years of legal wrangling, the U.S. Fish and Wildlife Service (FWS) has agreed. In a plan published yesterday, the agency proposed designating 838,232 acres–an area larger than Rhode Island–as critical jaguar habitat._

According to the story, the designation means that federal agencies cannot fund or authorize any activities that may adversely modify the critical habitat area, which covers parts of southeastern Arizona and a smaller area of southwestern New Mexico.

Thoughts? Anyone ever see a jaguar or hear of someone else seeing one? The jaguar in the picture is one that was captured and collared (and later died) in Arizona a few years back.