An Alberta, Canada man is facing numerous charges after a sting that netted more than 500 sets of illegal antlers.... 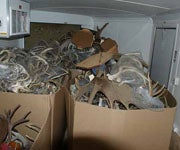 An Alberta, Canada man is facing numerous charges after a sting that netted more than 500 sets of illegal antlers.

From this story in the Calgary Herald:
An east-central Alberta man and his business are facing charges after a four-month undercover investigation into illegal big-game trafficking led to the discovery of 500 sets of deer antlers and other antlers from moose, elk and caribou. The antlers were seized Aug. 25 when Fish and Wildlife officers executed a search warrant at an auto-repair business in Sedgewick, Alberta Justice and Solicitor General said in a news release Tuesday.

According to the story, Garland Larry Poyser of Sedgewick and his business, Poyser Auto Service, face two counts of unlawfully trafficking in wildlife, one count of possessing wildlife for the purpose of trafficking, and one count of unlawful possession of wildlife. The 500 sets of antlers were from both whitetails and mule deer. Wildife officers also found 36 sets of moose antlers, six sets of elk antlers and one caribou rack. The story doesn’t state where the antlers came from, how they got them or what they were doing with them, but any way you slice it, that’s a lot of horn.