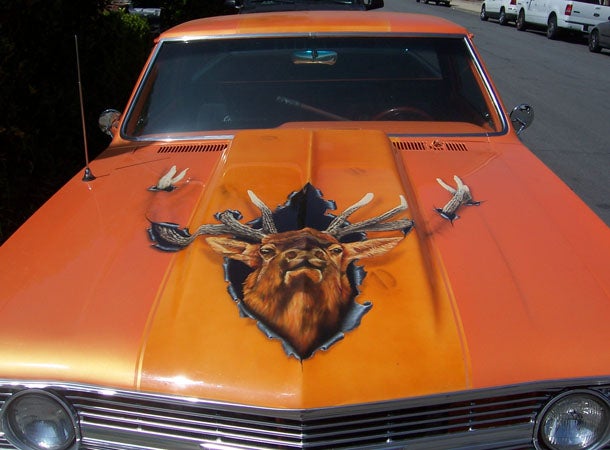 “People get whiplash when they see this car. The orange color is as bright as a hunting vest, the lower rocker panel has elk with a light background ghosted into it, and the hood–well the elk looks like it has ripped its way out from under the car. I worked a lot of action into the rendering,” says Primeau, who opened his shop, Primo Customs, with his wife 18 years ago. His work has been featured on The Discovery Channel program “Rides” and TLC’s “OverHaulin’.”

“Ron’s brother started the restoration and they brought me in to tackle the paint job. At first Ron just wanted something special on the tailgate, but then he saw some of the wildlife that I’d painted for other projects and suddenly we were taking it to a whole different level.”

And so the Elk Amino was anointed.

“The whole job, from taking down the failing old paint, doing a bit of body work, and all the airbrushing and painting took a little more than 4 months. I’m doing another car for Ron that is painted head to toe with fish, and I have almost a year invested in the paint work alone,” says Primeau. “Some people ask why I’d paint an elk on an El Camino. Because I can. My work wakes me up in the morning and keeps me dreaming at night.”