An Arizona man with one of the coolest nicknames (and personalized license plates) around just hauled in the largest fish... 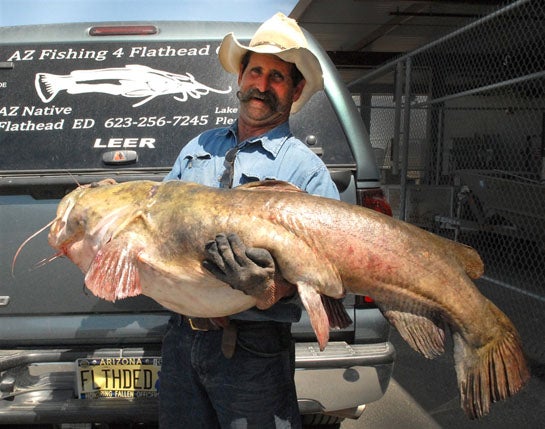 An Arizona man with one of the coolest nicknames (and personalized license plates) around just hauled in the largest fish ever recorded in the state of Arizona. Appropriately enough for a guy nicknamed “Flathead Ed”, the fish was a massive 76-pound flathead.

From this story on azcentral.com:
A Surprise man broke a 25-year-old state record Friday, after he reeled in the biggest fish on record during an overnight outing on Bartlett Lake. Eddie Wilcoxson, or “Flathead Ed” as he’s known to friends, was asleep on his boat at about 2 a.m., when a flathead catfish started pulling on his line, Arizona Game and Fish Department said in a news release. Wilcoxson, 56, struggled with the fish for about 35 minutes until he finally pulled it into the boat. Officials verified its weight at 76.52 lbs and length at 53.5 inches.

According to the story, Wilcoxson’s catch set the record for the heaviest recorded fish of any species in state history, beating a 74-pound flathead caught out of the Colorado River in 1988. Wilcoxson told reporters that he sometimes sleeps on the water while fishing for three to four days at a time, even spending one three-week stretch on the water during Thanksgiving. His previous best fish was a 65-pounder. He caught the giant flathead on a two-pound live carp.

Much like big blues, flatheads are becoming a popular target for trophy anglers. What’s the biggest flathead you’ve ever caught?