Bighorn Curls Found in Alberta Could Break The World Record 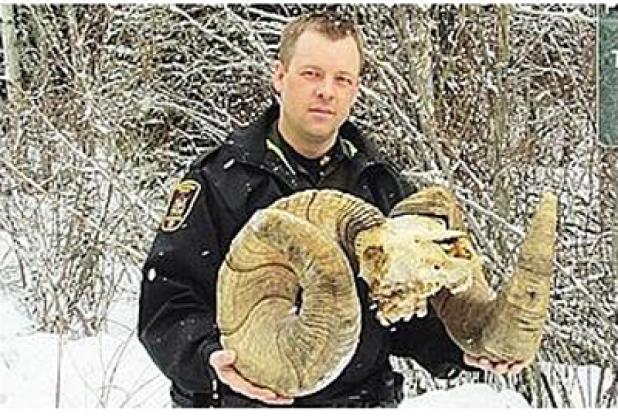 The Edmonton Journal reports that Alberta Fish and Wildlife officers recently found a set of Rocky Mountain bighorn sheep horns that may be the largest in the world. A preliminary measurement of 209 1/8 inches beats the current Boone & Crockett record by less than an inch.

Wildlife officers had kept track the ram in the past because of its particularly large body and horn size and went looking for it after it seemingly disappeared from the foothills near the town of Hinton. They found the skull and horns and said the decade-old ram apparently died of natural causes in the spring of 2013. They took the set to Dean Bromberger, a measurer for Boone & Crockett, though the official measurement will take place June 10th, after a mandatory 60-day drying period.

“These are impressive. We could tell just by looking at them that this would at least be pushing a world record. There was just so much mass. I was awestruck,” Bromberger said.

Since government employees found the deceased sheep on private land, the officers that found the skull said they hope the set will go on public display in a museum or with a conservation group. Jack Reneau, director of big game records for Boone & Crockett, also noted that three of the ten largest sets of horns recorded in the group’s record books came from “picked up” animals, not animals harvested by hunters.