Photo posted on Facebook by Hell Pizza Hell Pizza, a chain operating throughout New Zealand and with restaurants in London,... 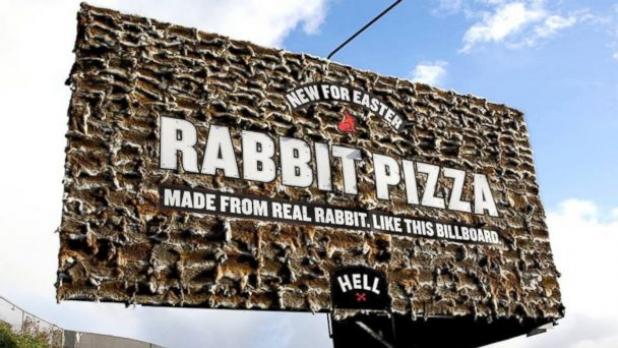 Hell Pizza, a chain operating throughout New Zealand and with restaurants in London, Seoul and Brisbane, has created a stir with its latest artisanal offering just in time for Easter: rabbit pizza. If that wasn’t enough, Hell Pizza is advertising with a billboard covered in real rabbit skins, ABC News reports. Animal rightists are (surprise) outraged.

One of the first species introduced by Europeans, rabbits quickly overpopulated parts of the islands and are now pests in New Zealand. Stoats, ferrets and weasels were introduced to control rabbits, and the result was a disaster for New Zealand’s native birds.

Rabbits are controlled by year-round hunting in New Zealand and much of the meat is processed and sold commercially. The rabbit furs on the Hell Pizza billboard came from a commercial processor. The Hell Pizza creation itself features smoked wild rabbit, toasted pine nuts, beetroot and horopito relish (horopito is an herb native to New Zealand). No reports yet on how it tastes, but it sounds good.