Largest Grizzly Bear Taken By a Hunter in Alaska 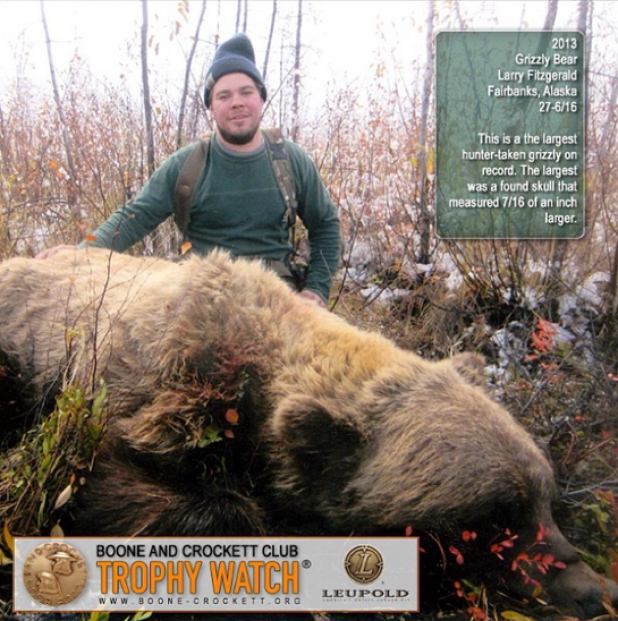 Boone and Crockett collects data from trophy animals either found or harvested by hunters to help gauge wildlife management practices. A press release from the organization says it ranks bears according to skull size and Fitzgerald’s bear measured 27 6/16 inches–just 7/16 of an inch smaller than the reigning world-record skull found in Alaska in 1976.

“One would think that a relatively accessible area, with liberal bear hunting regulations to keep populations in line with available habitat and food, would be the last place to find one of the largest grizzly bears on record,” said Richard Hale, chairman of the Boone and Crockett Club’s Records of North American Big Game committee.

Hale said the Alaska Department of Fish and Game liberalized hunting regulations in the area Fitzgerald hunted to help manage an overpopulation of grizzlies, and while baiting is legal, Fitzgerald stalked his bear after spotting it during a moose hunt.

“Grizzly populations are doing well across all their ranges. That includes populations in the Lower 48 states that are currently federally protected under the Endangered Species Act, but will soon be up for delisting and management authority turned over to the watchful eye of state wildlife managers,” said Hale.