A Portland, Ore., family was attacked by a ferocious animal in their home — their pet cat named Lux —... 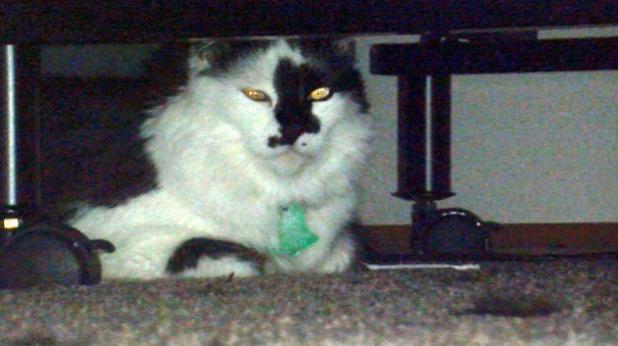 A Portland, Ore., family was attacked by a ferocious animal in their home — their pet cat named Lux — and had to call police for help.

The attack began when Lee Palmer’s 7-month-old son pulled the Lux’s tail, the Oregonian reports. Lux, a 4-year-old, 22-pound house cat with a “history of violence,” responded by scratching the baby’s forehead. Palmer kicked the cat to get it off the boy.

The kick angered the cat and that’s when, in Palmer’s words, “it went over the edge.” Palmer called police after he and his girlfriend, baby, and dog were safely shut in a bedroom

“I kicked the cat in the rear, and it has gone over the edge. He’s trying to attack us — he’s very hostile. He’s at our door; he’s charging us,” Palmer told dispatchers.

Officers responded and were able to capture the cat with a dog snare. Lux was taken to a Portland shelter but the Palmer and his girlfriend want their pet back and hope that with therapy Lux’s problems can be solved. Jackson Galaxy, the “cat whisperer” and star of Animal Planet’s “My Cat from Hell,” offered to help, and plans to film his visit to Portland for an upcoming episode.