Carl Moore of Townsend, Georgia was plying the waters near Key West, Florida for shrimp last month when he hauled... 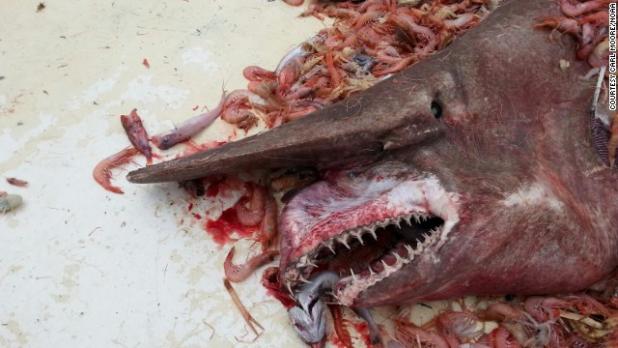 Carl Moore of Townsend, Georgia was plying the waters near Key West, Florida for shrimp last month when he hauled up a rare goblin shark — a predator fish infamous for its clown-like overbite and protruding nose. Goblin sharks are so rare that this is only the second known goblin shark to be pulled from the Gulf of Mexico (the first was in 2000).

Moore told CNN he has fished for shrimp for 50 years and while some strange fish have mistakenly landed in his nets, nothing compared to his first impression of the 15-foot goblin’s features.

“First thing I told them boys was, ‘Man, he’s ugly! Looks prehistoric to me,'” Moore said.

Because the species tends to favor ocean depths between 1,000 and 3,000 feet deep, shark expert John Carlson, who is writing a piece on goblin sharks for a scientific journal, says Moore’s fish means a lot to biologists.

“Beauty is in the eye of the beholder,” Carlson, a National Oceanic and Atmospheric Administration research biologist said. “Some would call them ‘ugly.’ I think, ‘interesting.’ We don’t know a lot about deep water fauna. We know little about (goblin sharks) — how long they live, how fast they grow.” Moore took a few photos of the shark so he would have a story to share with his 3-year-old grandson when he returned, and then released the fish back into the ocean. “Anything that’s alive we try to put back in the ocean,” he said.