Last Saturday, a West Virginia angler on the Ohio River was simply trying out some new gear in his boat... 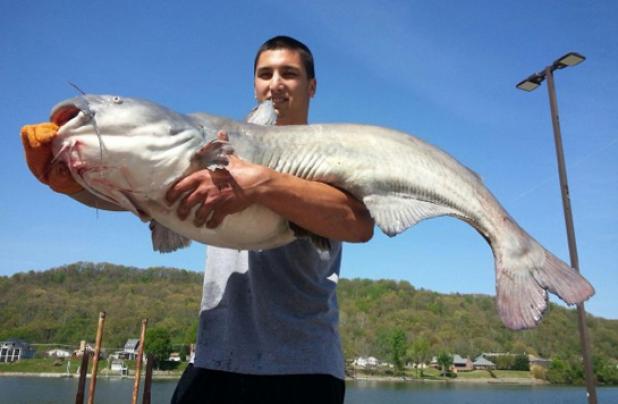 Last Saturday, a West Virginia angler on the Ohio River was simply trying out some new gear in his boat at the right place and right time when he hooked and landed a 47.75-inch, 52.95-pound blue catfish–beating the previous state record of 43.9 inches and 44.5 pounds.

The MetroNews says 22-year-old Austin Hoffman took his girlfriend to fish below Robert C. Byrd Lock and Dam when they decided to make one more run. Just before motoring upstream, the fish of a lifetime took the bait.

“About the time I started reeling the ones on the rear up, I saw the front one go down,” he said. “I fought him for about 15 minutes and when I got him to the surface, there was no doubt in my mind it was a new state record.”

Hoffman’s blue catfish is especially noteworthy because locks and dams constructed on the state’s rivers have since caused the fish’s populations — a native species to the area — to plummet. Five years ago, the West Virginia Division of Natural Resources began a program to restore blue catfish numbers, and believe Hoffman’s catch is a sign things are working.

“We suspect records for a new fish like this are going to be broken quite a lot,” said Biologist Scott Morrison who certified the new record. “However, this time it wasn’t broken by just a pound or so, it was broken by a considerable amount.”

Hoffman, a biology major at Marshall University, said he didn’t have a net in the boat and was worried the big fish would roll up in the fishing line and eventually break off, as blue catfish are known to do. Once caught, he was able to stuff it into the boat’s live well where it remained alive while Morrison verified the record.

“I was going dirt bike riding Sunday evening and I didn’t want to drive all the way back to the Ohio River,” explained Hoffman. “So I released him alive into the Kanawha River at the St. Albans boat ramp.”