A pregnant moose that was hit and killed by a Swedish motorist gave birth to a live calf inside his... 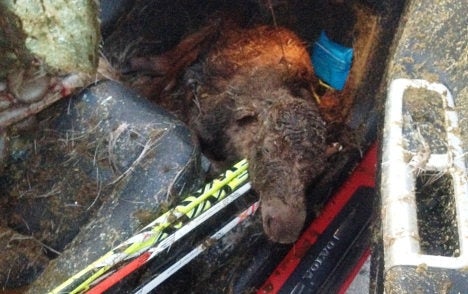 A pregnant moose that was hit and killed by a Swedish motorist gave birth to a live calf inside his Volvo. Jesper Modin, a well-known cross-country ski racer, was on his way home to the town of Ostersund when he came over a hill and into a moose (called an “elk” or “alg” in Sweden), The Local reports.

The moose smashed his windshield and rolled over the top of the car. Although covered in blood and moose guts, Modin was unhurt. A passing pickup gave him a ride and towed his vehicle to the nearest town 90 minutes away. When Modin opened the passenger side door to retrieve some possessions from the glove compartment, he found a calf elk alive on the floor with its umbilical cord still attached.

The police called a wildlife expert, who, unfortunately decided to put the calf down, saying it could not survive without its mother.