An injured whitetail buck wandered into a Concord, N.C., hospital last Thursday. The deer likely came from a nearby wooded... 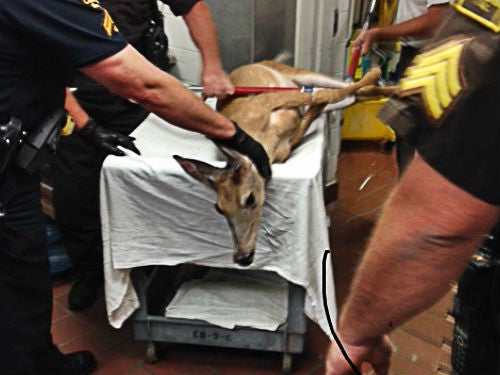 The deer likely came from a nearby wooded area, ran across the highway, leaped over some tall bushes, and landed on a parked car, shattering the windshield and injuring itself in the process, CBS affiliate WBTV reports.

Hospital officials said the deer wandered in an open door and was loose in a kitchen storage area before someone trapped it in a mop closet, and that the animal never came into contact with any patient-care areas.

Animal control officers were able to tranquilize the buck and transport it out on a rolling cart. The deer was taken a few miles away to a wooded area, where it was able to regain its bearings and walk into the woods after the tranquilizer wore off. Officers said the buck was in good condition — the deer reportedly only injured the protective coating on his antlers.