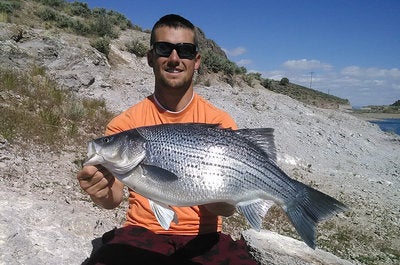 Angler Russell Nielson caught his first wiper on May 21 from Utah’s Newcastle Reservoir — and it turned out to be a new Utah state record. His 11-pound, 2-ounce fish bested the previous record by five ounces.

Nielson had just tied on a new hook and was adjusting his drag when the fish grabbed his bait and took off, KCSG reported. He landed the fish after a short battle, but noted it wasn’t the largest one he saw that day.

“I’ll definitely be back to Newcastle,” he said, “trying to improve on the record.”

Wipers are a hybrid cross of female striped bass and male white bass. Michael Hadley, a biologist for the Utah Division of Wildlife Resources, said the state planted wipers in the reservoir to help control the invasive golden shiner populations, and since then the health of the fishery has improved.

“We see very few shiners in Newcastle anymore,” he said. “And the survival and growth of rainbow trout has improved immensely.”