South Dakota’s Lake Oahe has now produced a state-record Chinook salmon for the second July in a row. On the... 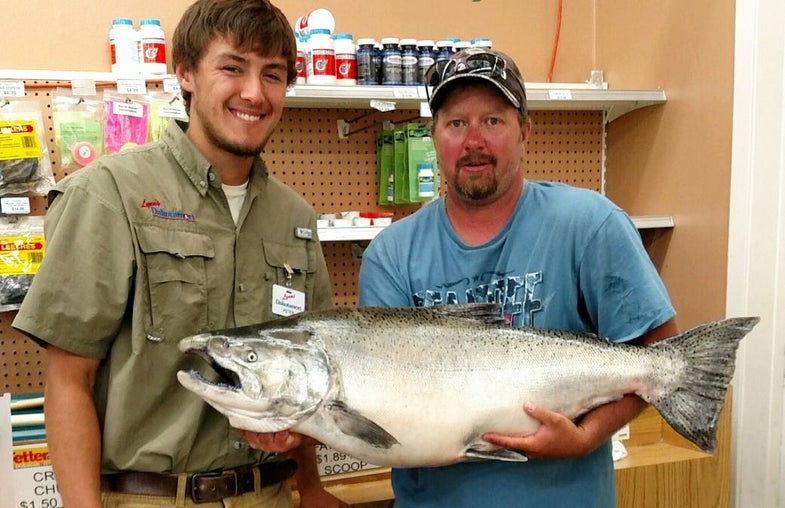 South Dakota’s Lake Oahe has now produced a state-record Chinook salmon for the second July in a row. On the 29th of this year, Darrick Koch, of Watertown, S.D., caught a 31.55-pound, 36-inch fish, besting the previous state record of 24.53 pounds—a fish caught in July 2015—by about seven pounds.

Koch told the Capital-Journal that the fish was his first salmon. He and his fishing partner, Troy Bramer, were trolling blue squid baits in about 170 feet of water when the salmon hit. It took Koch about an hour to land the fish—but he wasn’t even sure it was a salmon until the last 10 minutes or so of the fight. “When you’re out there… , [there are] all kinds of fish that could bite,” he told the paper. “You don’t really know what you have on.”

After landing the fish, the pair continued fishing, unaware that the Chinook could be a record. After 45 minutes, however, one of them at last Googled and found out that a 36-inch salmon could weigh 30 pounds or so. “That’s when Troy said maybe we should go into town and get it weighed,” Koch said.

The salmon population of Lake Oahe, which is a 370,000-acre impoundment of the Missouri River, is in a rebuilding stage, following a 2011 flood that devastated its rainbow smelt population and flushed large numbers of salmon through the Oahe Dam. But, in recent years, a baitfish boom has helped salmon and other gamefish grow to large sizes.

“Those lake herring (batfish) are the perfect size right now,” Geno Adams, a South Dakota fisheries administrator, told the Capital-Journal. “I wouldn’t be surprised if we saw the record broken again this year.”

Interesting enough, the new record was nearly broken: The day after Koch landed his fish, South Dakota angler Rachel Steichen caught a Lake Oahe Chinook that would have claimed the state record if not for Koch’s catch, according to South Dakota Game, Fish, and Parks.